Sports activities performed by Turks throughout the history were generally intended for Battle/Combat practice. Traditional Turkish Ancestral Sport Matrak was taught to the Janissary, Sipahi and Ottoman public by Renowned Turkish scientist Matrakçı Nasuh (1480-1564) as a Battle and Combat Art and practiced for centuries. Matrak game is a sport adopted as a scientific branch in Turkish history. Several of the Forgotten Turkish Sports such as Tomak game, Muşt Zen and Leked Kup, in addition to Matrak Game, have been reorganized with rules and principles in line with the present day’s conditions and have been re-established on 5th September 2008 by Researcher Sportsman and Matrakçı Efkan Çalış with traditional structures under the title of Matrak.  Matrak sport possesses training formats containing Turkish Swords, Yatağan Swords, Sword-Shield and other Combat Weaponry in addition to unequipped combat and defensive methods. Matrak trainings are as follows: 1-Matrak  a) Matrak Shield, b) Double Matrak, c) Shield Wooden Sword, d) Sword, e) Horseback Matrak Game, f) Matrak Game with Wheelchair 2-Tomak 3- Cenk  (Fierce Wrestling, Muşt Zen; Ottoman Punching Art, Leked Kup; Ottoman Kicking Art)  4- HIS- Defense For Everyone. Based on the social ethics structure in Turkish culture, Matrak aims to raise Brave, Virtuous, Qualified and Knowledgeable sportsmen.

Matrak game was taught to Ottoman soldiers by Matrakçı Nasuh with new technical games added. According to notes from the Travel Book by Evliya Çelebi, Sultan Murad IV learned 70 techniques of the game. With the reforms in the military system of the Ottoman army in the 19th Century, the use of sword and old style Combat trainings were banned (1826-Vaka-i Hayriye) and Matrak game was forgotten.  Matrak, Tomak and Cenk (Fierce Wrestling, Muşt Zen, Leked Kup) constituted an important part of Janissary, Sipahi and Ottoman court members daily practices. Re-animation and establishing process performed by Matrakçı Efkan Çalış also received contributions from Academics in Gazi University and Kırıkkale University Eastern Languages and Literature, History, Turkish Folk Science and Physical Education departments.  Matrak, in its new format, was associated with Federation of Turkish Traditional Sports Branches thus becoming official on 15th June 2010. The first tournament in Turkey was held in Ankara on 24-25 December 2011, receiving attendance from 115 sportsmen from 5 provinces. On 9th January 2012, it was included in the Ministry of National Education, General Directorate of Lifelong Learning curriculum and Matrak education started in Public Education Centre Schools all over Turkey.

a)     Club Registration, License, Visa and Health permit documents of sportsmen participating in the competition shall be checked prior to competition.

b)     In all games after the final checks of pre-game checks by the referees, players bilaterally say “Benimle Cenk Meydanına çıktığın için teşekkür ederim” “Thank You for Taking to the Field With Me”. At the end of competition, they’ll say “Kasıtlı ve kasıtsız hatalarımdan dolayı özür dilerim” “I Apologize for any Intentional and Unintentional Faults”. The competition shall begin with the command “Cenk” Fight and ends with “Dur” Stop command.

a)     In Matrak and Tomak games, sportsmen pay two games within periods determined in line with their class. Winning both games means victory. In case of deuce, a third game is played.

d)     In Tomak game, each hit on the back is 1 point. Hits to body sections other than the back score no points.

e)     It is forbidden to hit the opponent with the shield or to hit an opponent who dropped their game tools or protective materials.

f)      It is forbidden to intentionally drop or discard game tools and protective materials during competition.

g)     It is forbidden to do head butt, slap or punch, kick, knee or to utilize combat game knock back technique.

b)     The victory condition for Cenk is to make the opponent surrender within a period defined for each class.

c)     In case of deuce, a score-based second game is played for the same period. The active and clear hand and foot techniques applied on the opponent’s head or body score 1 point. Hits on the head using back techniques score 3 points. For clean and obvious knock back techniques; 2 points for dropping opponent facedown, 2 points for sideways take down and 3 points for dropping on the back. If the second game ends in deuce, another game is played in which the first player to score wins.

e)     Ladies conduct Combat Game without wrestling on the ground. Score keeping in ladies game is as defined in (c) clause.

a)     It is forbidden to ignore the referee’s stop command and to argue with the referee as well as any intervention by sportsmen or trainers to referee or score referees.

b)     It is forbidden to constantly leave the field or to run away.

e)     Any unsportsmanlike action or behavior is strictly forbidden. If such actions are performed, the trainer and sportsman shall be penalized within the context of the regulations.

Below are the classes and game periods for Matrak competition:

a) Minor Class: 09-12 years of age. Minor class game periods for Matrak and Tomak games shall be 2 games and 2 minutes per game. Cenk shall be 3-minute long single game.

b) Stars Class: 13-15 years of age. Stars class game periods for Matrak and Tomak games shall be 2 games and 2 minutes per game. Cenk shall be 3-minute long single game.

c) Young Class: 16-19 years of age. Young class game periods for Matrak and Tomak games shall be 2 games and 2 minutes per game. Cenk shall be 5-minute long single game.

ç) Adult Class: Age group shall be 19 or higher. Adult group game periods for Matrak and Tomak games shall be 2 games and 2 minutes per game. Cenk shall be 5-minute long single game.

d) In Tomak games performed during village wedding activities shall contain players aged 16 or higher. Game period in Tomak game is 2 games and 2 minutes per game.

All Matrak competitions are performed in summer months in open, turf fields. The inner circle diameter shall be 7 meters and outer circle diameter shall be 9 meters in this field. There shall be a 1,5 meter protection zone outside the outer circle. Boundaries of turf field shall be determined using thick white paint. Traditional canvas, dressing rooms, preparation and waiting areas for sportsmen shall be established. Matrak competitions shall be performed in sports halls on Matrak mats in winter months. Matrak mat shall be 8×8 or 10×10 of size with 1 meter square of colored section on the outside.

Mehter (Janissary) march or traditional Turkish march played with drum rhythm shall be played in all competitions without affecting the course of games. 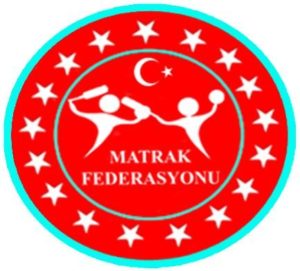